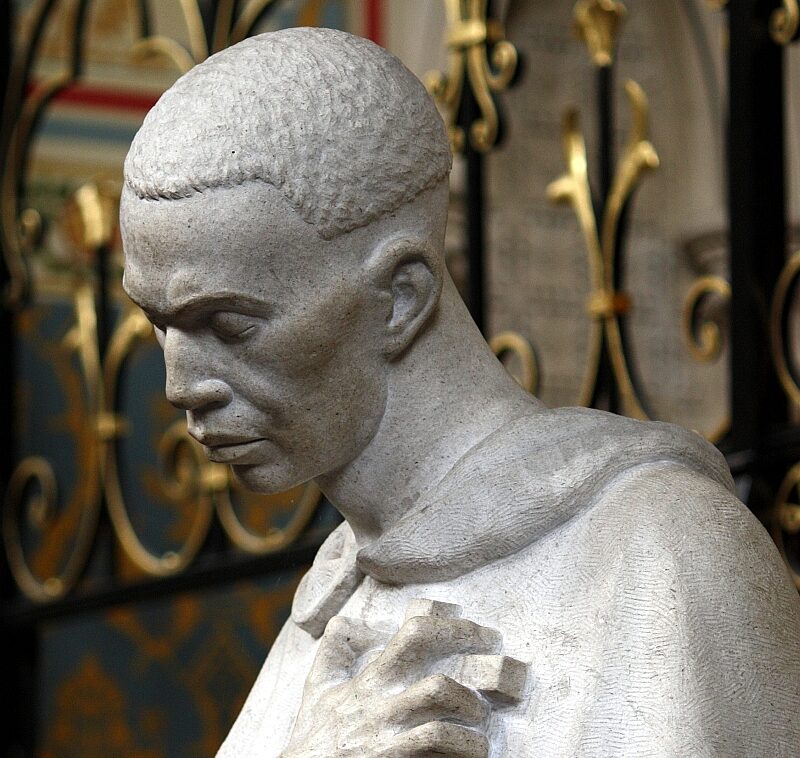 We are presently accepting donations (large and small) to purchase a modest statue of St. Martin De Porres to be erected on a side wall of our church.  This is a hopeful and joyful effort to celebrate the racial diversity of our Catholic Church and parish in these troubled times.

St. Martin De Porres was born in 1579 in Lima Peru, the illegitimate son of a Spanish nobleman and a freed slave of African and Native American descent.  St. Martin was a  friar noted for his kindness, his nursing of the sick, his obedience, and his charity. He is the patron saint of social justice, racial harmony, and mixed-race people. A plaque will be placed under the statue with all the names of those who contribute $200 or more (Total cost will be about $3000)

*The statue of St. Martin will compliment the St. Anthony Statue on the opposite wall. Over the next several weeks we will present portions of the biography of St. Martin De Porres in the Bulletin.

Born of a liaison between a Spanish grandee and a free black woman, Martín de Porres was raised in poverty and bore the stigmas of both his illegitimate birth and his mixed race. He was placed to study with a barber-surgeon, where he learned bloodletting and the administration of medicines. Compassionate and eager to serve, he began to volunteer with the Dominicans at age 15 and helped care for the sick in the monastery infirmary.

He became a Dominican oblate, or lay monastic, in 1601. Although it was not customary then to receive a mulatto into a religious order in Peru, Martín was considered an exception and became a Dominican lay brother in 1610. He was known for his devotion to the Eucharist and constant prayer, and he refrained from eating meat as an act of austerity.

In addition to his work in the infirmary, Martín distributed food and alms to the poor and needy in Lima and was friends with St. Rose of Lima, another lay Dominican. For the youth of Lima, he established a school, considered by some to be his monument.

His funeral was an occasion of public honour, and many miracles were said to have occurred after his death. He was beatified in 1837 by Pope Gregory XVI and canonized by Pope John XXIII.