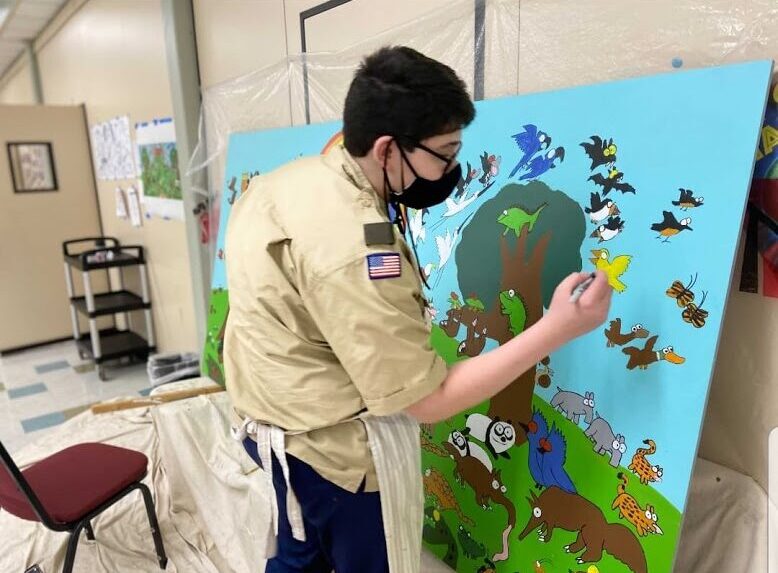 When coming up with a project to earn his Eagle Scout rank, Kevin Umstetter, a senior at John Glenn High School and a scout from Troop 113 was not sure what to do. Many boys work on building structures at parks, places of worship or schools as their projects to earn their Eagle Scout award, but Kevin wanted to be different and reflect his interests. His favorite thing to do is draw and he loves learning about and drawing all kinds of animals. When discussing where he would like to help, he chose St. Francis! He participated in the youth program and attending church with his family is part of his life and this is where he wanted to give back. Upon many discussions with mom, he decided that he would make a mural for the lower level of the church for the children who come to learn about their faith.

His favorite story growing up was Noah’s Ark. He still has the storybook that was gifted to him many years ago by his uncle, Father Maddaloni of St. Rosalie. He would spend time reading and looking at the animals, and Kevin used that as his inspiration. Originally, it was to be one panel depicting the story of Noah but upon discussions with Deacon Allan it turned into three panels. The first panel depicts the animals preparing to board the Ark, the second panel is them traveling and Noah releasing the dove, and the third panel is the animals and Noah arriving on land. He drew them in a manner that would be appealing to children and adults alike. There are so many animals that each time you take a look you see something different.

Kevin had planned to start the project in March of 2020. He had gotten approval and permission to work on his project when everything closed. Because his project would take place indoors, he had to wait to get permission to start and he worried if he would ever complete his plan. But he persevered and made it happen the first weekend of February despite the snowstorm that arrived Sunday. The scouts and adults alike enjoyed painting the murals. He set it up to be like a paint by number so the scout/adult would pick what they wanted to paint and got the number of the color and received the paint. During the week, final touch ups were made and the murals were ready for hanging. Now they are a permanent part of our Lower Level. Many thanks to Kevin! 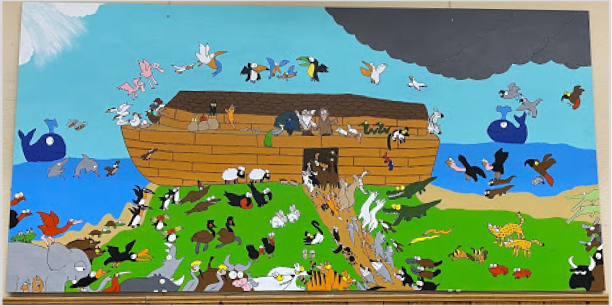 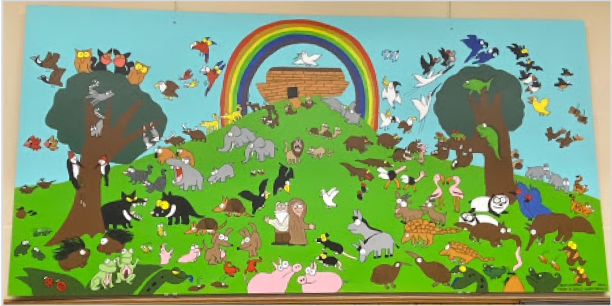