50th Year Jubilee: In the Service of the King 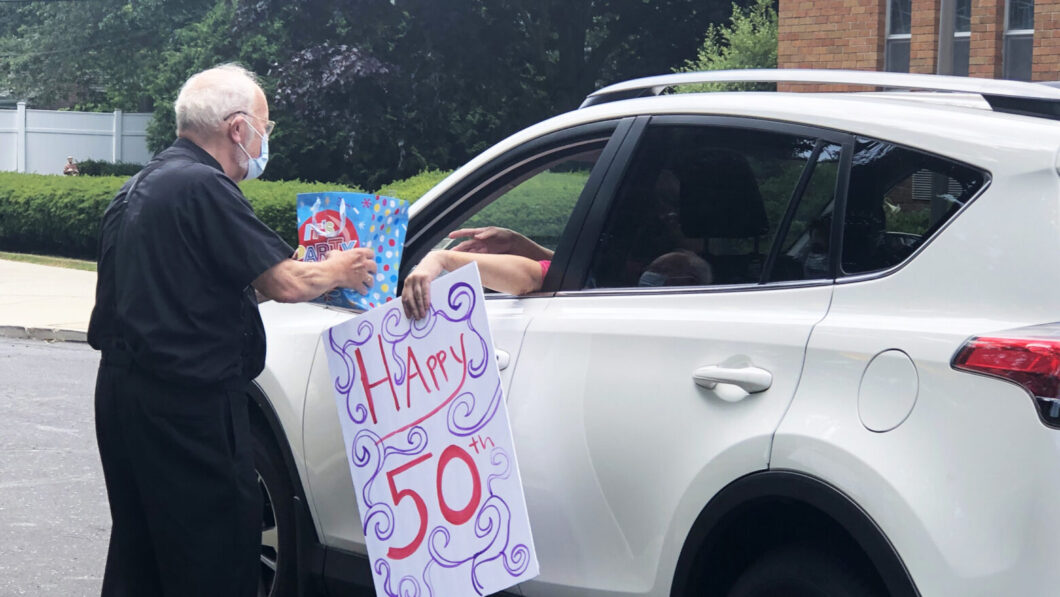 When someone has been working in the same vocation for 50 years, it can be pretty hard to surprise him in any major way. But that is what happened at 2:00pm on Sunday, June 28, when Fr. Peter Kaczmarek was surprised, touched, and delighted by the cavalcade of cars that the parish arranged as a drive-by celebration of his 50th Jubilee as a priest. He was sitting quietly in the rectory when he looked out and saw the flash of golden balloons. Fr. François Eale escorted him out to the honking horns and smiling people waiting to greet him and celebrate his life.

Car after car of parishioners, friends, and well-wishers slowly drove by Fr. Peter to wave, bump elbows, or drop off gifts and cards, and he had a personal greeting and word of thanks for each and every one. Four vehicles filled with the Sisters of St. Benedict led the way, decked out with music, streamers and decorations. The group stopped briefly to bring out a beautiful cake and gifts of his favorite Polish foods, smiling for the cameras and taking some photos and videos of their own to mark the occasion.

A steady stream of cars, vans, and trucks wove their way through the church driveway for over an hour, each group wanting to express their congratulations and joy to Fr. Peter. Starfish Coffee House was represented by several cars of happy members, and Deacons Allan, Jean, and Jim were on hand, along with people from many of the ministries. Fr. Peter was touched to see friends and former parishioners among the crowd, representing past assignments he has enjoyed over his five decades as a priest.

Fr. Peter Kaczmarek was born and raised on Long Island, entering the seminary of the Diocese of Rockville Centre. His final studies took place in Rome, where he was ordained in December 1969.The following June he accepted his first assignment with St. Hugh of Lincoln in Huntington Station. He came to St. Francis of Assisi parish as an associate pastor from 1985 until 1992, when he was appointed pastor at Church of St. Gertrude in Bayville. On October 4, 2009, the feast of our patron St. Francis of Assisi, Father Peter returned to us and was formally installed as our pastor.

At the gathering on Sunday, the parish staff presented him with a memory book filled with stories, photos, and personal recollections from current and former parishioners, expressing to him all he has meant to them over the years. He was deeply moved and thankful, later saying, “It’s a joy to know I have the support of the people, and thanks for thinking about me, folks. They see the goodness and overlook the faults and failings, and it’s really such a heartening thing. The Lord has used me in so many different ways.”

We all wish you a Blessed 50th Jubilee Year, Father Peter, and may only good surprises delight you throughout the coming year!

A Mass of commemoration and in-person celebration will be scheduled in the Fall.